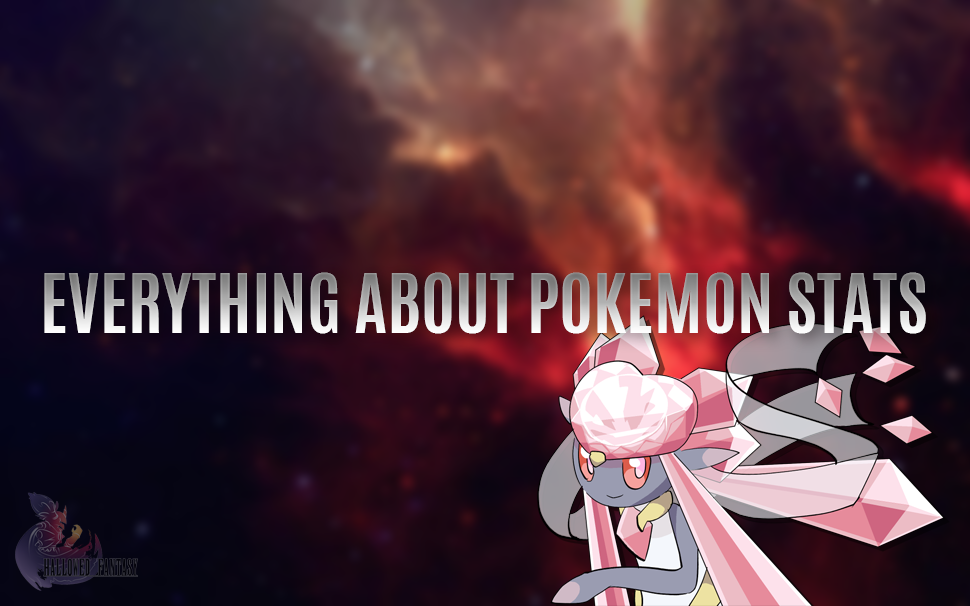 ​
Effort Values (also known as EVs) are values that improve the stats of Pixelmon based on the strengths of opposing Pixelmon they have defeated.
There are 6 different types of EVs:
- HP
- Attack
- Defense
- Special Attack
- Special Defense
- Speed

Each Pixelmon can gain a maximum of 510 EVs, with a limit of 252 per stat.
As you gain EVs in a certain stat , that stat rises. 1 stat point equals approximately 4 EVs at level 100.

You can check your EVs by using the /evs <slot> command. This will display a Pixelmon's EVs per stat, and the total amount of EVs it has. For example, if I want to check my Zoroark's EVs which is on my 2nd slot, I'd use /evs 2

(Example of a fully EV-trained Pixelmon) 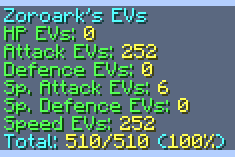 There are multiple ways to EV-train your Pixelmon. The most common way would be to head over to either /warp ev1 or /warp ev2 and head over to the area of the stat you want to train your Pixelmon in. The signs indicate which stat it's for and which Pixelmon are used in that field. For example, the area below is good for training Special Defense and uses Seel to do so. 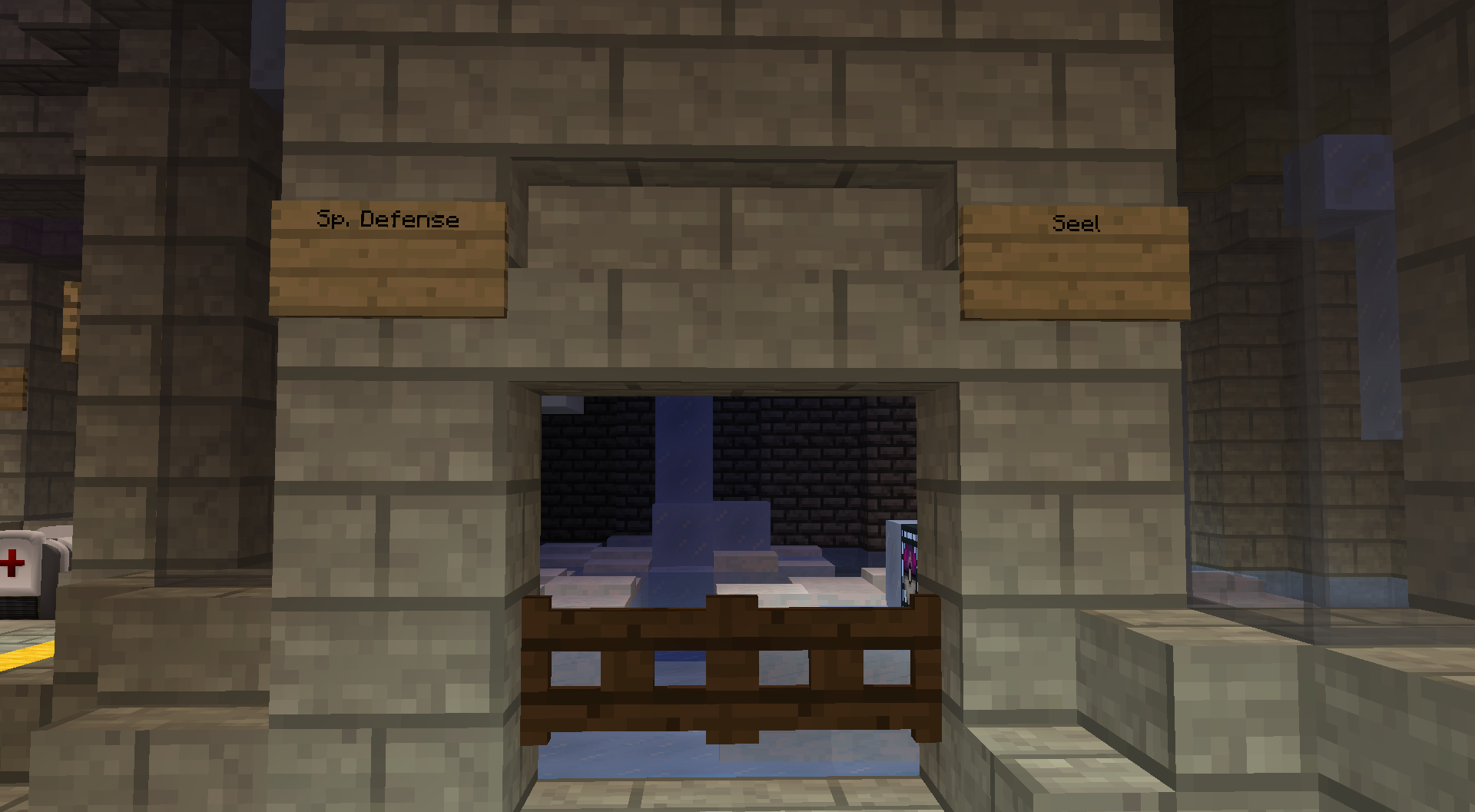 EV-training a Pixelmon can end up making it insanely strong if done properly. For the following example, I'll use the Zoroark shown above.
Smogon's a great site to figure out what to train your Pixelmon in. If we search for Zoroark, We're redirected to this link.

Right off the bat, we can already see a lot of useful information, such as their base stats, recommended moves to use, their type, ability and nature (we'll get to that in a bit), along with a recommended held item.
You can easily tell that Special Attack is their best stat, so you'd want to EV-train them in that field without a doubt. Attack and Speed are both the second-highest stats, meaning that it'd be fully up to you at this point.

Certain held items allow the holder to gain additional EVs whenever a Pixelmon is defeated. However, Pixelmon will have their Speed temporarily halved while holding these items.
When a Pixelmon holding a power item gains EVs, the holder will receive 8 additional EVs in a certain stat, depending on which power item is held.
There are Vitamin which raise a specified EV by 10 points, but will not go higher than 100.
Certain berries lower the amount of EVs from a Pixelmon in a cretain stat by 10.

A Pixelmon holding a Macho Brace will gain double the normal EVs.


You're able to use an EXP. Share to EV-train your Pixelmon, but remember that both Pixelmon will receive the same amount of EVs.

Each of the six battle stats has an IV associated with it, with that IV coming into calculation alongside the Pixelmon's base stats and EVs to determine the actual stat number. A Pixelmon's IVs are determined when it is generated by the game.

You can raise IVs by breeding, but that's a topic which has already been covered here. EDIT LINK REMINDER

You can check your IVs by using the /ivs <slot> command. This will display a Pixelmon's IVs per stat, and the total amount of IVs it has out of 186 (maximum). For example, if I want to check my Zoroark's IVs which is on my 2nd slot, I'd use /ivs 2 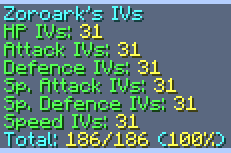 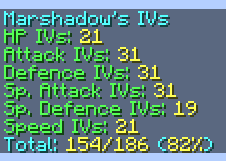 » You can buy an IV Modifier for 1 stat in the Vote Shop (/voteshop) and even more IV Modifiers in the Donation Store.
» IV Modifiers are also purchasable at /warp pokeeditor with in-game money. It's $125,000 for Non-Legendaries and $200,000 for Legendaries.

Each individual Pixelmon has a nature that influences its stats. This nature is randomly determined upon encountering the Pixelmon. Each nature raises one stat to 1.1x (+10%) its normal level and decreases another stat to 0.9x (-10%) its normal level. There are no natures which influence HP, and there are 5 natures which increase and decrease the same stat and therefore have no effect at all.

Natures by stat
* These are neutral natures. They do not increase nor decrease any stat.


That covers everything I can tell you about Effort Values, Individual Values and Natures.

Thanks a lot for taking your time to read this, and best of luck!
Thana
Click to expand...